For the folks affected by Hurricane Sandy, this Thanksgiving may be quite different. Tragically, lives were lost. For the families and friends of those victims, the absence of their loved ones on this holiday and the holidays to come will be even more painful. I pray for their strength to get through it. Many people lost their homes, cars, treasured possessions, and more. Out-of-state utility workers left their families to help us. Public Safety workers have put in exhaustive hours. I hope that the majority of them can be home with their families for Thanksgiving. There will be much to ponder this Thursday when reflecting upon what we are grateful for in our lives.

My family, our relatives, and friends got through it relatively unscathed; we were extremely fortunate, compared to the devastation experienced by some of our neighbors and fellow Long Islanders.

Yesterday, on a brisk yet sunny autumn day, I took a long drive to attend a guided walking tour of Northport. Along the way, I admired the colors of the leaves which still clung to the trees that were left standing. I listened to one of my "mix-tape" CDs, which included (get ready, I have an extremely eclectic love of music): "Moondance" by Van Morrison, "The Rising" by Bruce Springsteen, "Forever in Blue Jeans" by Neil Diamond, "You're My Home" by Billy Joel, "Peaceful Easy Feeling" by the Eagles, and "Song for You" by Leon Russell, and many, many more. But it was some of the sights on this journey that encouraged me; the clean-up, repair, and rebuilding that has already taken place in such a short period of time. However, from seeing the photographs on the news, in the paper, and online, there is devastation on this island and surrounding east coast communities that will take months, if not years, to recuperate and rebuild.

Several Robert Frost quotes went through my mind, including:

"Nothing gold can stay."

"In three words I can sum up everything I've learned about life: it goes on."

"Hope is not found in a way out but a way through."

I enjoyed the informative guided walking tour of Northport's historic Main Street. The Northport Historical Society's guided tour ("Parading Down Main Street") is offered approximately one Sunday a month, starting at 1:30 p.m. The next scheduled tour is December 16, 2012. A ticket cost $5.00, and it is well worth it. (The museum also offers a self-guided tour, Tuesday through Sunday from 1 pm - 4:30 pm). The tour guide, Dan, was a wealth of information. I highly recommend it ~ get ready to learn a lot.
If you've never visited Northport, you will see "Gunther's Tap Room," a favorite hang-out of Jack Kerouac's, and you will discover where a speakeasy existed during Prohibition. 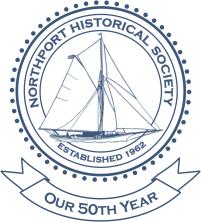 The museum, listed in the National Register of Historic Places, was built in 1914 with funds provided by Andrew Carnegie for a Village Library. It functioned as a library until 1967; it became the home to the Northport Historical Society Museum in 1974. The society was established in 1962, and this year marks the 50th Anniversary of the society.

Why the walking tour of Northport, you might ask?

My husband grew up in Northport; his parents were born and raised in Northport. My mother's family moved from Brooklyn to Northport in the early 1950s. My grandfather, Edward Welsh, ran the concession stand at Crab Meadow Beach; he installed a jukebox under the pavilion, and he filled it with records from some new singer named Elvis Presley. Tragically, a massive heart attack claimed his life at age 47, leaving my broken-hearted grandmother to raise six children (ages 4-16, my mom being 15) on her own.

Even more connections: I delivered mail one summer in Northport; I subbed as a music teacher in the Northport-East Northport School District shortly after graduating from LIU. When I became a Suffolk County Police Officer, I patrolled the East Northport and Northport areas outside of the Incorporated Village of Northport. Fate has been pointing me towards Northport my entire life.

My true crime memoir centers around the 1955 hatchet murder of a taxi driver on Scudder Avenue in Northport (today happens to mark the 57th anniversary); it was a case that my armchair-detective grandmother, who lived two miles from the scene of the crime, discussed with me regularly, among other unsolved cases. Sadly, she passed away at age 61 when I was 13. I often ache to have an "adult" conversation with her about the case and what I've uncovered over the past two decades.

Speaking of Northport, there's an unusual but fun event occurring on Saturday, November 24, 2012, at 7 p.m., in front of the Northport Hardware Company, 90 Main Street; the Annual Leg Lamp Lighting Ceremony (an homage to "A Christmas Story"). Check out this YouTube Video from last year's event. 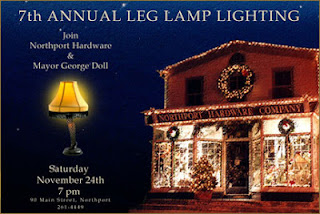 Wishing you and yours a warm, relaxing, enjoyable Thanksgiving with your loved ones.

Here's one of my favorite Erma Bombeck quotes, sure to give you a chuckle: