"The Raven" by Edgar Allan Poe

On January 29, 1845, readers of the New York Evening Mirror were treated to a narrative poem called "The Raven" by Edgar Allan Poe.

The editor of the Mirror, Nathaniel Parker Willis, introduced the poem, calling it "unsurpassed in English poetry for subtle conception, masterly ingenuity of versification, and consistent, sustaining of imaginative lift...it will stick to the memory of everybody who reads it."

Poe was paid nine dollars for its publication.

George Rex Graham, a friend and former employer of Poe's, had declined Poe's offer to be the first to print "The Raven." Graham said he didn't like it, but paid Poe $15.00 in charity. Graham made up for his poor decision by publishing Poe's essay, "The Philosophy of Composition" in Graham's American Monthly Magazine for Literature and Art, a year later.

Email ThisBlogThis!Share to TwitterShare to FacebookShare to Pinterest
Labels: Authors, History, On writing 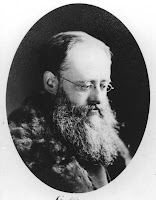 On this date in 1824, British novelist Wilkie Collins was born.


T.S. Eliot described The Moonstone as the first and greatest of English detective novels.


A quote from The Woman in White seems to have stood the test of time: