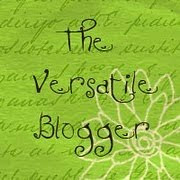 Le0pard13 of Lazy Thoughts From a Boomer has so kindly chosen to bestow upon me the Versatile Blogger Award. Thank you, le0pard13!
Here are the rules:

7 things about me:
1. I gave up ballet & dance lessons as a child because I didn't want to miss watching The Monkees on Saturdays.
2. I had about 50 pen pals as a teenager; my record was 14 letters received in one day.
3. The first concert I attended was at the Westbury Music Fair, to see Bobby Sherman. The Nitty Gritty Dirt Band was the opening act.
4. I've been read by John Edward at least three times. I appeared on "Crossing Over with John Edward" in 2001.
5. I love going to the movies, several times a month if possible.
6. As a Public Information Officer, I spent eight weeks at the scene of the tragic Flight 800 plane crash in the summer of 1996.
7. Before becoming a cop, I was a music teacher. I also waitressed, worked at a bakery, a deli, a real estate office, a summer camp, was a gal friday, and I delivered mail, too.
It is my pleasure to pass along and share the Versatile Blogger Award with:
Misfit Salon
Marilyn Meredith
Dark Voyage - Travels with Crime Writer Hilary Davidson
Hannah Grace - Hope, healing & the Cat-Human bond - Tracy L. Strauss
Confessions of a Mystery Novelist ~ Margot Kinberg
Mystery Writing is Murder ~ Elizabeth Spann Craig
Join Our Loop
The Bookshelf Muse
Portia Sisco
Practicing Writing
Mysteries and Margaritas
Tactical Pants
Thoughts in Progress
Mystery Lovers' Kitchen
One Minute Writer
Posted by Kathleen A. Ryan at 5:30 PM 15 comments:

I had a lovely surprise on Twitter.com when I read a tweet from Jeanette K., aka @jnetcat5, with a link to her Tactical Pants blog post, "Top 78 Police Twitter Accounts," that included my Twitter account, @katcop13. I follow many of the accounts Jeanette has listed, and I found several new ones.
Thanks, Jeanette!
In addition to law enforcement-related topics, I tweet about writing, authors, the publishing industry, and items of general interest. I enjoy the information-sharing that Twitter provides. Are you active on Twitter? Do you find it useful? Or are you Twitter-shy?
(Photo from Tactical Pants blog)
Posted by Kathleen A. Ryan at 4:52 PM 5 comments:

"Looks Too Good To Be True.com" is a web site that educates consumers and helps prevent them from becoming victims of internet fraud schemes.
The funding for the site comes from the United States Postal Inspection Service and the FBI.
Their page on fraud types is comprehensive; it explains Auction Fraud; Financial Fraud; Identity Fraud; Sweepstakes/Lottery Fraud, and much more.
You can take a risk assessment test to see if you could potentially fall victim to one of these schemes.
Another site, Fraud.org, provides tips for avoiding internet fraud.
Posted by Kathleen A. Ryan at 1:51 AM 4 comments: 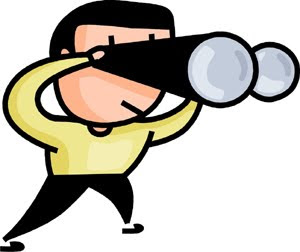 A writer's toolbox usually includes a dictionary and a thesaurus. One of the handiest tools I've come across is Angela Ackerman's blog, The Bookshelf Muse. She has developed an "Emotion Thesaurus," a fabulous "idea bank" for when you get stuck in trying to describe a character's emotion through a physical action; a "Setting Thesaurus," to help with setting descriptions; and a "Color, Texture, and Shape Thesaurus," which explores these tangibles and provides real world examples.
It truly helps when you are searching for just the right words for description. Check it out!
Angela, who writes chapter books, Middle Grade and YA books, is celebrating the milestone of having 800 followers and 200,000 page views to her blog, by holding a very generous "800/200,000 Contest."
I've been the lucky recipient of an earlier contest held by Angela, in which I won a critique of a first chapter. Her critique was extremely valuable, and I am so grateful.
The deadline is rapidly approaching ~ Wednesday, June 16, 2010 ~ so if you'd like a chance to win a first page critique, a five-page in line critique, a full manuscript evaluation (of up to 100,000 words), or some exciting mystery prizes, click on over. The only requirements: become a follower; leave a comment, including a link to a writing blog that you adore (can't be your own or Angela's), and an optional step: pass on the word about The Bookshelf Muse ~ on Twitter, Facebook, your blog, writing forums, etc. 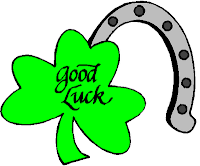 You can follow Angela on Twitter: @AngelaAckerman.
Good luck to those who enter ~ and thanks to Angela for her generosity to the writing and blogging community.
Posted by Kathleen A. Ryan at 12:20 PM 5 comments:

Email ThisBlogThis!Share to TwitterShare to FacebookShare to Pinterest
Labels: Authors, Contests, On writing 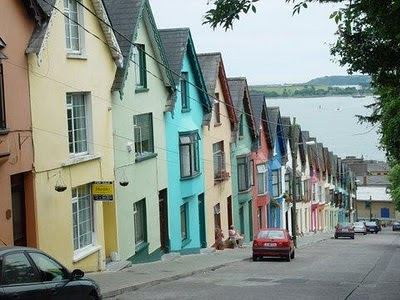 I took this in Cobh, Ireland, County Cork, in August 2003.
Cobh is the former Queenstown, the last port of call for the Titanic.
It was the departure point for 2.5 million who emigrated to
North America between 1848 and 1950.
For more Straight Out of the Camera, visit Murrieta365.
Posted by Kathleen A. Ryan at 7:49 AM 8 comments:

This video is a fascinating look behind the moral dilemma faced by prisoners who claim innocence.
Posted by Kathleen A. Ryan at 12:08 AM 4 comments:

Being a Cop and a Mom

Someone recently stumbled upon my blog via a Google search of “Being a cop and a mom.” I’m hoping that person will return. Even though I started blogging with fellow members of NY/TriState Sisters in Crime at Women of Mystery over a year ago, this blog is new. I welcome the opportunity to blog about being a cop and a mom, or at least what it was like when I was on the job, and how it was and is for many women officers who are also moms.

The topic is a broad one (no pun intended), and I’m sure I’ll be writing several posts on the subject from time to time.

Women are in the minority in the field of law enforcement. As for my own experience, it has grown leaps and bounds since I began in 1986. As law enforcement agencies have adjusted to having women on the job, they’ve also had to face the issue of pregnant officers.

Each department is different concerning their policies with pregnant officers. I can tell you about how it was when I was on the job (which isn’t the same today). Pregnant officers were allowed to work the desk up until the time they were ready to give birth. They could take a maternity leave, either using accrued time (sick, personal, vacation) or take an unpaid leave of absence (up to 9 months of the pregnancy and 9 months following), but along with the unpaid leave came the loss of medical benefits.

Since it took nearly five years to conceive, and I rarely took vacations (it was tough to plan trips when you hope you're going to conceive), my accruals built up. I endured years of infertility treatments (which could be explained in a dozen posts), but during a third IVF attempt, we succeeded. By this time, I was no longer in patrol but in Public Information, which doubled as the front desk of Police Headquarters, and I was also answering the Crime Stoppers tips line.

I had been studying for the Sergeant’s exam, and when it came time to register for the civil service exam, I realized that I’d be eight months pregnant by the time the test came around. There was one problem: the tests were administered at Suffolk Community College, where all the desks are attached, and I couldn’t imagine squeezing into the attached desk and chair.

So, I checked the box on the form for special accommodations, and explained my dilemma. The day of the test, I walked into my assigned room. There was one large table with a chair in the center of the room, and a proctor at the front of the room. I was embarrassed to have a room and a proctor to myself, and I even asked why I had to be alone. She said that if I was in a room with other test takers who saw the large desk I had, they’d want one, too. Also, if a large person needed this accommodation, it might be embarrassing in a class full of people sitting in attached desks.

I took the sergeant’s exam a few times, usually scoring in the 90s, but in order to be considered, you must get 100 or close to it ~ It’s highly competitive, and takes years of studying to do well.

I worked up until the week before I gave birth, and I used six months of sick, vacation, and personal leave to be home with my daughter.

After being in Public Information and Crime Stoppers, which were desk jobs, I decided not to pursue the sergeant’s exam. I didn’t want to make it. After working midnights in Public Information, then steady weekends (alternating weeks of day & night shifts), then getting sent back to patrol for two years (the County Exec at the time cut commands and sent cops back to patrol, creating overtime situations, which didn't help), and returning to Public Information (just in time for the Katie Beers kidnapping, a huge media event), and eventually getting a Sunday through Thursday tour in Crime Stoppers, and later a Monday through Friday position, I didn’t want to give it up. I loved the work in Crime Stoppers, and I was fortunate to have a Monday through Friday position, alternating shifts. A week of 8 am to 4 p.m., followed by a week of 4 pm to midnight. Making sergeant would mean a promotion, of course, but it also meant a new command, and I’d lose my steady schedule. The stability of the schedule was extremely helpful when it came to being a mom ~ at least when they were very young.

Once my firstborn entered kindergarten, however, it meant I didn’t see her every other week, five days a week. By the time she got home, I was at work for a 4 pm to midnight shift. Since my husband was working full time, also, we had to enroll our daughter in an after-school program, since no one was home to meet the bus. Our son was enrolled in a full-time preschool. After a 4x12, I'd stay up late; how many people come home after a 9x5 job and jump right into bed? I'd watch TV, or write emails, surf the web, write, eat, etc. I'd get up early the next morning to get my daughter ready for the bus ~ it was my only chance to see her during the week of nights.

During my 4x12 weeks, I’d call the kids every night to chat and say goodnight.

I remember an officer who was pregnant and hid it, staying on the street until she was almost five months pregnant. I asked her how she handled morning sickness; she said she'd just roll down the window of the patrol car and throw up.

The Suffolk County Police Department faced lawsuits from pregnant officers who were told they couldn't work light-duty assignments; that they had to go home and start their maternity leave. An article on FindLaw, written by Joanna Grossman, explains the lawsuit. I worked with the officers mentioned in her article, Sarah and Sandy -- both super cops and moms. The unfair treatment was a frustrating time for female officers. In the end, however, they prevailed.

Well, that's a condensed overview of my experience of being a cop and a mom!