Talk about a Cinderella story! This is the dream of every self-published author, or even those who've been tempted to take the plunge of self-publishing. This success story might very well prompt reluctant writers to give it a shot.

The story has been covered (quite nicely, I might add) by The Wall Street Journal, and there's an accompanying video, too. Read and/or listen how author Hugh Howey, a 37-year-old college dropout, wrote Wool (which originally began as a short story in 2011), a post-apocalyptic thriller about the remnants of humanity living in a giant underground silo, and how he was vigorously pursued by publishers.

Check out some of Hugh Howey's short stories. For more information on Wool, check out Wired's GeekDad Book Review by Erik Wecks -- his pick for Best Indie Fiction in 2012 (you can follow Erik on Twitter @erikwecks)

Here's an illustration by Mike Sudal for The Wall Street Journal: 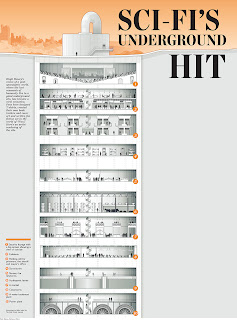 Print publication rights for this New York Times bestseller were acquired by Simon & Schuster, and tomorrow, Wool hits the stores; it will cost $15 for a paperback version, $26 for a hardcover, or $5.99 digitally. In a rare move, Howey retains the digital rights.

For tomorrow's U.S. launch of Wool, Hugh Howey will be appearing at Murder by the Book in Houston at 6:30 p.m. 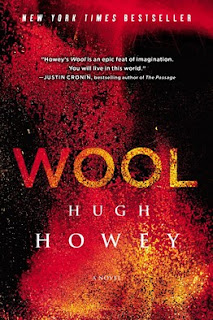 Congratulations, Mr. Howey ~ and best wishes to the reluctant self-publishers out there. May you be inspired to take the plunge!
Posted by Kathleen A. Ryan at 12:06 PM 2 comments: