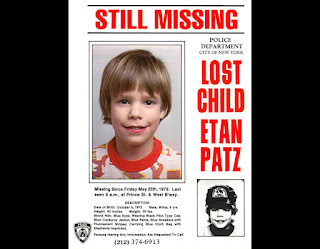 Thirty-three years ago today, Etan Patz disappeared along the two-block route to his bus stop, the first time he ever walked it alone.

I've written an in-depth post about the case on Women of Mystery, including the difficult revelation that the evidence was within reach of the original investigators, yet they chose not to pursue it.
Posted by Kathleen A. Ryan at 7:54 PM