An exhibit honoring police officers killed or injured in the line of duty by drunk drivers is on display at the Roosevelt Field mall in Garden City, Long Island, until November 21, 2010 (*update: See the video below of the news conference and display).
According to Newsday, the relatives and supporters of Nassau police officer Kenneth Baribault and Suffolk police officer Glen Ciano gathered at the mall in Nassau County this past Monday to unveil the memorial, which is intended to remind drivers during the holiday season that driving under the influence can ruin many lives -- including those of police officers, such as Baribault and Ciano, whose patrol cars were struck while on duty. The photos below depict the mangled patrol vehicles of Officers Baribault and Ciano (photos via NY Daily News). 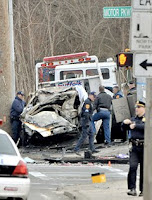 The memorial was unveiled less than 12 hours after a DWI arrest of a Brooklyn man who struck and killed an off-duty NYPD officer on the Northern State Parkway.
Suffolk Police Officer Glen Ciano, a 22-year veteran, was struck by a suspected drunk driver and killed on February 22, 2009. Nassau County officer Ken Baribault was severely injured on May 18, 2008, after his patrol unit was struck by an accused drunk driver on the Long Island Expressway during a traffic stop of a suspected drunk driver. 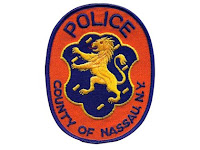 The exhibit was made possible through the efforts of Baribault's sister, Danielle Rella; Nassau County Police Commissioner Lawrence Mulvey, and Mothers Against Drunk Driving.
*****

On Twitter, today is "Thank-a-Cop Thursday." I thank Officers Ciano, Baribault, and all law enforcement officers in New York for their devoted service and sacrifices to make Long Island a safer place to live. As a Suffolk County Police Officer for 21 years, I had the privilege of working with Glen Ciano in the Second Precinct; he is sorely missed by his friends, family, and colleagues.
If you are an active user of Twitter, you can participate in "Thank-a-Cop Thursday" by using the hashtag #tacop. Follow Mike Ellis of Emergency Communications Network, the man behind #tacop, at @EmergCommNetwrk. You can also follow Mothers Against Drunk Driving @MADDOnline. 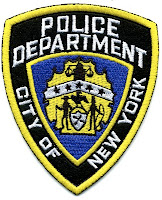 Email ThisBlogThis!Share to TwitterShare to FacebookShare to Pinterest
Labels: Do The Right Thing, On Community, Police-related, Safety issues, Thank-a-Cop-Thursday