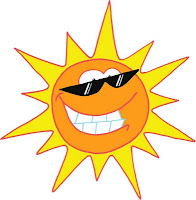 Follow the official Seinfeld page on Facebook. You can catch re-runs on TBS.
Posted by Kathleen A. Ryan at 1:40 AM