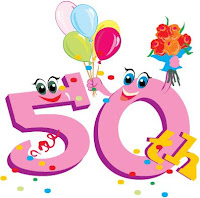 Today's the big 5-0. I don't feel fifty! I got that AARP application in the mail last week, so I guess it's real!
I did a quick search and found out whom else celebrated/celebrates June 13 as his/her birthdate. I'm in some pretty good company. Here's a quick sample:
Basil Rathbone ~ 1892 - born in South Africa, actor ~ played Sherlock Holmes
Dorothy L. Sayers ~ 1893- British Author
Paul Lynde ~ 1926 - Comedian; Bewitched actor
John Forbes Nash ~ 1928 - American Mathematician
Christo ~ 1935 ~ Bulgarian Artist
Malcolm McDowell ~ 1943 ~ British Actor
Whitley Strieber ~ 1945 - American Writer
Stellan Skarsgaard ~ 1951 ~ Swedish Actor
Richard Thomas ~ 1951 ~ American Actor
Tim Allen ~ 1953 ~ American Actor
I'm thrilled to learn that June 13 is also the birthday of fellow Sister-in-Crime Daryl Wood Gerber (aka Avery Aames). Hope you're enjoying your day today, Daryl!
I came across this inspiring quote:
"I have enjoyed greatly the second blooming... suddenly you find - at the age of 50, say - that a whole new life has opened before you." ~ Agatha Christie
Here's another one, author unknown: "Forty is the old age of youth; fifty is the youth of old age."
There's tons of jokes, of course, about turning 50. Here's a cute one from Digital Dream Door:
Well Organized Life

Two senior ladies met for the first time since graduating from high school. One asked the other, "You were always so organized in school, did you manage to live a well planned life?"

Her friend asked, "What do those marriages have to do with a well planned life?"

"One for the money, two for the show. three to get ready and four to go."