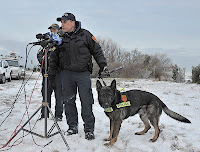 This is the most current "mystery" on Long Island. Suffolk County Police are investigating the deaths of four bodies dumped along a roadway. Their identities are unknown. At least two are women.
On Saturday, December 11, 2010, Suffolk County Police K-9 officer John Mallia and his partner, "Blue" (photo, above, from Overoll.com) were conducting exercises and searching for a woman who went missing in May: 24-year-old Shannan Gilbert from Jersey City. They found skeletal remains of a woman. When the search expanded on Monday, imagine their surprise upon finding three more bodies, within a quarter-mile stretch along Ocean Parkway. The parkway runs from Jones beach, which is 14 miles west, past Oak Beach, to Captree State Park.
None of the bodies turned out to be Shannan Gilbert. Police are investigating whether the remains could be of another woman, Megan Waterman, of Scarborough, Maine, who was last seen at a Hauppauge hotel in June, where she was staying with her boyfriend, but early reports indicate it is unlikely her remains.
A web site has been established concerning the whereabouts of 22-year-old Megan Waterman, who was an escort who advertised on Craigslist. A $2500 reward is being offered for her safe return, or her recovery and an arrest and conviction. 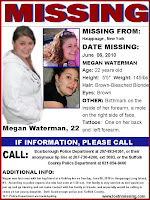 The New York Daily News has photos of the missing women.
The police are hoping that science may help crack open the case.
Even if none of the bodies turns out to be Megan Waterman, in addition to the identities of the four bodies recovered, another mystery remains: Where are Shannan and Megan?
If anyone has information concerning the identity of the four bodies, the whereabouts of Shannan or Megan, or any other clues, please contact Crime Stoppers of Suffolk County. Thanks!
Posted by Kathleen A. Ryan at 7:48 AM