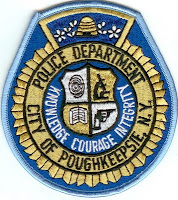 An 18-year veteran of the Poughkeepsie City Police Department made the ultimate sacrifice when responding to "shots fired" call on Lower Main Street near the Poughkeepsie Train Station on Friday, February 18, 2011.
Officer John Falcone, age 44, came upon 27-year-old Lee Welch of Catskill, holding a three-year-old girl and waving a gun. Officer Falcone was most likely unaware that Welch had already shot his 28-year-old wife, Jessica, inside a vehicle in a nearby parking lot. Jessica succumbed to her wounds by the time she was taken to the Vassar Brothers Hospital.
Welch fled with the child, with Officer Falcone in pursuit. The officer caught up with him, pulled the child from Welch, and passed her off to the safety of a nearby civilian. Along with fellow officers, Falcone continued to pursue Welch, and they exchanged gunfire. It is believed, however, that Welch turned his gun on himself after shooting Officer Falcone. Officer Falcone underwent surgery, but succumbed to his injuries.
Lee Welch had been arrested for domestic incidents several times in January. The couple recently separated. News reports have identified the child as the couple's daughter; they have two other children. After their recent separation, they were meeting near the train station so that Jessica could take possession of the car.
Officer John Falcone, a true hero, is the 27th officer to die in the line of duty in the United States in 2011. He is survived by his parents. He was the third officer to die in the line of duty in Poughkeepsie City, the last one occurring in 1969, and before that, in 1916.
On Twitter, updates have been posted to #pjshooting. A press conference is slated for Sunday morning at 10 a.m.
Photos from the incident can be found at The Poughkeepsie Journal. A photo of the bunting displayed at the Poughkeepsie City PD was taken by YNNHudsonValley and shared on Twitpic.
For more information on Domestic Violence, or how to get help, visit The National Domestic Violence Hotline.
Posted by Kathleen A. Ryan at 6:12 PM