I am heartbroken to learn of the death of an officer in my neighboring police agency, the Nassau County Police Department. Michael J. Califano, age 44, a 12-year-veteran, had pulled over a box truck on the Long Island Expressway, shortly before 11 p.m. on Friday, February 4, 2011, for insufficient lighting. While writing a summons in the patrol car, a flatbed tow truck driver plowed into the police vehicle, pushing it under the box truck, but also landing on top of Califano's car. It took rescue workers 30 minutes to free him.
He was taken to Nassau University Medical Center, where Officer Califano died from his injuries. 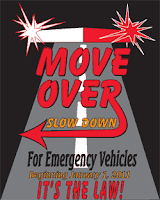 John Kaley, age 25, of New Britain, Connecticut, was arrested and charged with criminally negligent homicide, assault, and failing to move over for an emergency vehicle. New York became the 48th state to enact the "Move Over" law, which took effect in 2011.
The occupants of the box truck and a passenger in the flatbed suffered injuries and were treated at the hospital.
Officer Califano is the 19th officer to be killed in the line of duty in the United States in 2011.
He leaves behind a wife, Jacqueline, and three sons: Michael, Christopher, and Andrew.
May he rest in peace.
UPDATE: Michael Puccio, a friend of Officer Califano's, sent me a tribute video he created on You Tube in memory of Officer Michael Califano.
Posted by Kathleen A. Ryan at 4:21 PM

Email ThisBlogThis!Share to TwitterShare to FacebookShare to Pinterest
Labels: On Community, Police-related