While working in Public Information, my partner received an telephone inquiry from a gentleman who lived in California. He and his wife were considering a move to a particular town (that shall remain nameless) in Suffolk County.
As police officers, we have to tread carefully when answering questions of this nature. There are ways to answer truthfully and diplomatically.
My partner chose to give him a direct, blunt reply.
"It's a breeding ground for criminals," he said.
The caller promptly notified his real estate agent, who in turn responded forthwith to her county legislator's office, who called the Police Commissioner.
My partner got in trouble.
Years later, that particular legislator resigned from his post when he pleaded guilty to bribe receiving in office. He worked out a deal, however, by working with the District Attorney's Office on a dozen other public corruption cases. Three years later, he served six months in jail, after pleading guilty to bribe receiving and scheming to defraud. Thirty-three other charges were dropped. 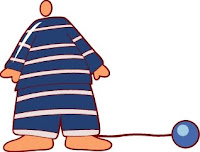