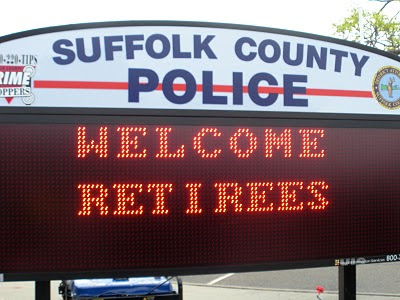 I attended the celebration of the 50th anniversary of the Suffolk County Police Department, held Friday, May 14, 2010, at John L. Barry Police Headquarters in Yaphank. Retirees and current members were invited to attend the festivities. A special group of retirees assembled on this day: those who became members of the brand new Suffolk County Police Department on January 1, 1960. Each of those members received a certificate and had a photo taken with the current Police Commissioner, Richard Dormer.
All retirees received a name tag, a journal, a program, a commemorative coin, a DVD, and a Certificate of Appreciation.
The day also included a memorial service, led by Rev. Canon Edward Wisbauer, Chief of Chaplains, and Rabbi Dr. Steven Moss, Deputy Chief of Chaplains, to honor those fallen in the line of duty. Glen Ciano, an officer I worked with in the Second Precinct, was among those honored. Glen was struck by an alleged drunk driver on February 22, 2009. Glen was the 22nd officer to die in the line of duty in Suffolk County. He is deeply missed by his loving family, friends, and colleagues.
Glen's name was added to the monument in Washington D.C. during Police Memorial services this week, which I wrote about in an earlier post.
Rev. Canon Edward Wisbauer told gripping, emotional tales of heroism by Suffolk County officers, during extreme rescues; how some were severely injured; and some who made the ultimate sacrifice. Many families members of fallen officers attended the ceremony to represent their loved ones.

Lunch and dessert was served to a crowd that I would estimate reached over 1,000.
Onlookers gathered to listen to P.O. Ed Johntry, retired Chief of Department Joseph Monteith (photo, below), and the Reverend Canon Edward Wisbauer as they dedicated the time capsule that was buried for the 75th anniversary. 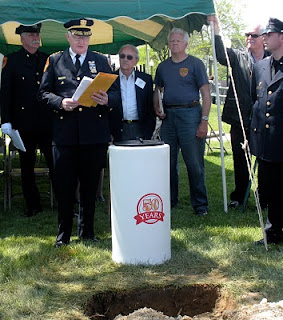 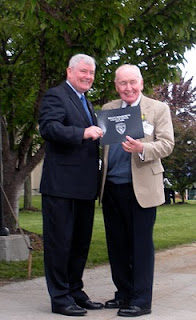 There are two "original" members of the department whom I have interviewed in the past for my true crime memoir. One is Dave McKell(photo, right, with Commissioner Dormer) a former New York State Trooper, Investigator with the District Attorney's Office, and he retired in 1972 as a Detective Lieutenant in Homicide. Dave and I have become good friends, and we meet every month in a writing group. 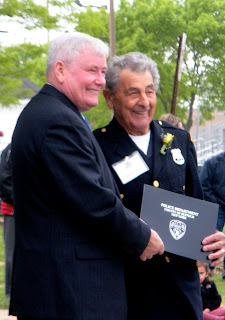 Another officer I interviewed for my book was Sam Macedonio (photo, left). He was a Huntington Town Patrolman before joining the SCPD.
The birth of the SCPD plays a role in my book, which centers around an unsolved taxi driver murder in 1955. Another unrelated unsolved murder in 1954, which I also write about, set the ball in motion to combine several town and village police departments to eventually form the SCPD.
I proudly served as a police officer in the Suffolk County Police Department from 1986-2007 and hold many precious memories.
Posted by Kathleen A. Ryan at 10:21 AM