Today's War Story comes from one of my former bosses. During his rookie years in the early 1970s, he got a call to contact Police Headquarters. His assignment was to make a death notification to a resident in his sector, about a man who had died in NYC ~ about an hour away from Suffolk County.
When he knocked on the door at 3 a.m., the resident, obviously just awakened, opened the door.
The rookie compassionately delivered the news about the deceased in NYC.
"Yeah, and?" the groggy man replied.
His brusque reaction puzzled the young officer, leaving him speechless.
The resident barked, "We buried him two weeks ago!"
*****
If you have a war story you'd like to share, either enter it in the comments or provide a link to your blog and I'll update the page. 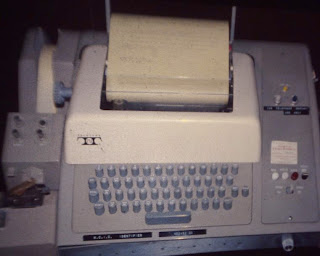 Photo: '70s teletype machine ~ from Dickinson PD Virtual Museum
Posted by Kathleen A. Ryan at 7:00 AM